Lawn Grubs (aka White Curl Grubs, Curl Grubs, Cockchafer) are the larvae of the ‘African Black Beetle‘. Both the larvae and the beetles are common problems in Sydney lawns. A precursor to their invasion is in early Spring which is mating season for the African Black Beetles. Female beetles will descend on innocent lawns across Sydney to lay their eggs underneath the soil. It doesn’t take long, and by late Spring their eggs will hatch into small larvae. They have three growth stages and this is considered the ‘first instar’. They don’t cause much damage during the first instar as they will usually feed on organic matter in the soil. The most damage occurs in early to mid Summer which is when the larvae are in their second and third instar. During this period the larvae are now feeding on the roots of lawns, which is when you will start to see visual signs of damage. In late Summer the larvae will pupate emerging as an African Black Beetle from February through to early Autumn. Over Autumn beetles will feed on a range of things including turf, plants and their roots. Beetles are not very active during Winter and will live through winter in the soil, remerging in Spring to mate and repeat the cycle. African Black Beatles that emerged in Autumn will usually die by early Summer.

Treatments are best started in September by applying a granular ‘Lawn Beetle and Grub Killer‘ to the surface of the soil. This will counter any female beetles foraging in your turf looking for places to lay their eggs after mating. Late spring is the next best time treat lawn grubs this is when the larvae hatch into the first instar and are closest to the surface. A lawn grub hose on soil drench will treat grubs at their least invasive stage. Repeat the hose on applicator 2 weeks later. Grubs in their third instar are a little harder to control so ensure you do your followup sprays. In late Summer, early Autumn the grubs pupate into Beetles and emerge from the soil to counter their emergence do another granular application to the surface of the soil. Because Black Beetles can fly long distances complete irradiation is often not possible but to minimise your lawn becoming a breeding ground. This should be incorporated into your annual lawn care annual management program. 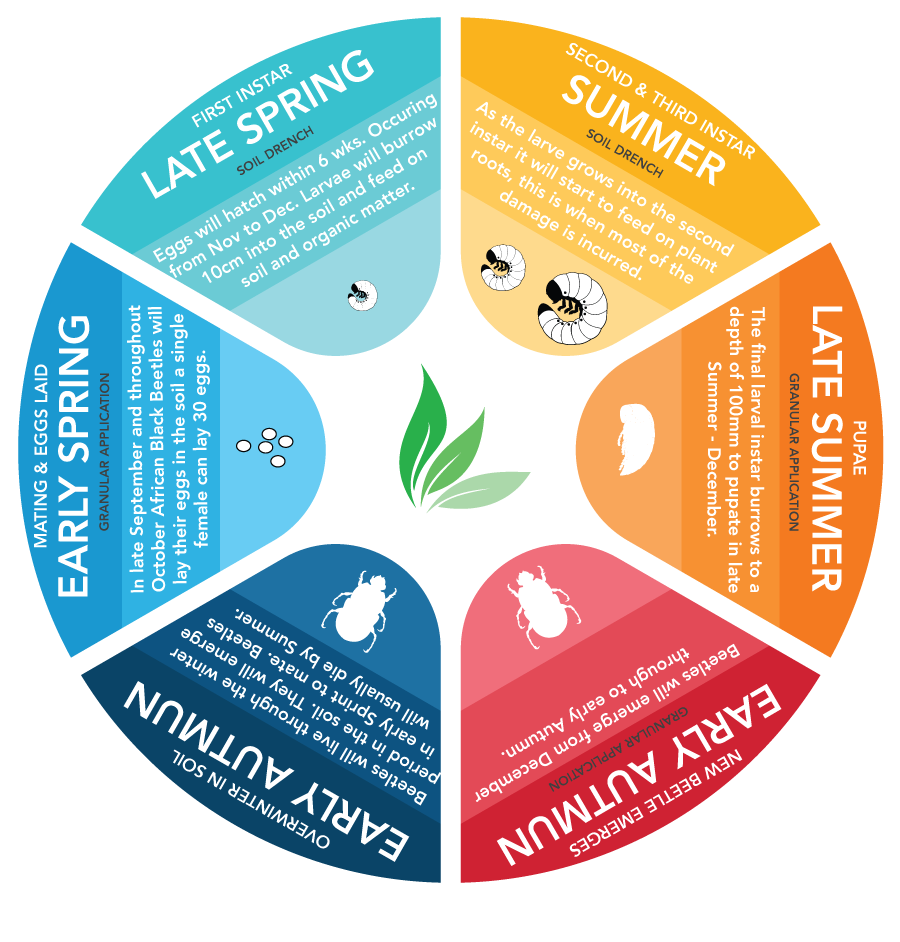